1917 Abstinence Observance Today**: Partial abstinence, meaning that meat can be eaten only at the principal meal on these days

Potential Prayer: Liturgy of the Hours and/or The Sorrowful Mysteries

Potential Fast Intention(s): To follow in the footsteps of Saint Cyril of Jerusalem, Doctor of Instruction for the Church.

“When a famine hit Jerusalem, the poor turned to Cyril for help. Cyril, seeing the poor starving to death and having no money, sold some of the goods of the churches. This was something that other saints including Ambrose and Augustine had done and it probably saved many lives.” 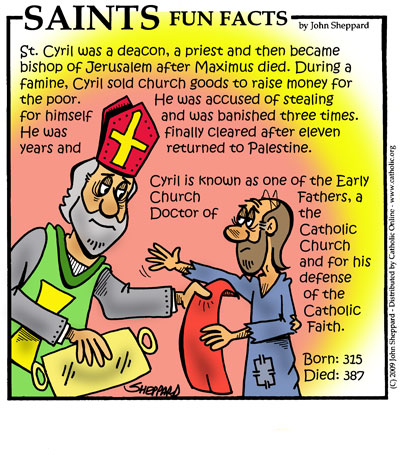 Potential Give(s): Consider donating some time, energy and/or funds to those groups suffering from famine worldwide.  According to the UN FAO, 795 million people worldwide, one in 9, remain undernourished and in a food insecure region.

Fasting Inspiration for the Day:  The Coptic Orthodox Church, established by Saint Mark the Apostle in 42 AD, which has 18 million followers, and was originally in communion with Rome, but split with the Roman Catholic Church in 451.

Out of the 365 days of the year, Copts fast for over 210 days. During fasting, no animal products (meat, poultry, fish, milk, eggs, butter, etc.) are allowed. Moreover, no food or drink whatsoever may be taken between sunrise and sunset.

These strict fasting rules…are usually relaxed by priests on an individual basis to accommodate for illness or weakness.

Lent, known as “the Great Fast”, is largely observed by all Copts. It starts with a pre-Lent fast of one week, followed by a 40-day fast commemorating Christ’s fasting on the mountain, followed by the Holy week, the most sacred week (called Pascha) of the Coptic Calendar, which climaxes with the Crucifix on Good Friday and ends with the joyous Easter. Other fasting seasons of the Coptic Church include, the Advent (Fast of the Nativity), the Fast of the Apostles, the Fast of the Virgin Mary, and the Fast of Nineveh.

Comments of the Day:  Hope everyone had a prayerful First Friday!