1917 Abstinence Observance Today**: Partial abstinence, meaning that meat can be eaten only at the principal meal on these days

Potential Prayer(s): The Liturgy of the Hours and the Sorrowful Mysteries Rosary

Potential Fast Intention: That those who rely or use technology regularly, may use it wisely, for God and to benefit the greatest amount of people.

Potential Give: To rediscover an uncured/hidden/dormant talent this Lent and to develop it so you can give the fruits of your labors to more for the glory of God, who gave it to you J.

Fasting Inspiration of the Day: Pope Saint John Paul II, the Great (“JPII”), b. 1920 – d. 2005, patron saint of young Catholics and families, the second longest serving pope in modern history, the first non-Italian to hold the pontificate in more than 500 years.

JPII beatified 1,340 people and canonized 483 saints, more than the combined tally of his predecessors in the preceding five centuries.  I remember overhearing a Cardinal once say, jokingly, that if he had to go, he hoped it would be during JPII’s pontificate since his chances of being declared a saint afterwards seemed so much higher!

Amazingly, JPII earned both a doctorate in Sacred Theology and a doctorate in philosophy, which provided him, in my estimation, a well-formed view of the human person and the human condition.  He leveraged both to create, almost single-handedly, the Theology of the Body, which, I believe, is the antidote for much of the illnesses seen in modern culture, particularly in the West, surrounding interpersonal relations, as well as sexual and gender identity, among others.

He also learned at least 12 languages, 9 of which he would regularly use during his pontificate. For these reasons, and many more, many Catholics now refer to him as “the Great.”

Fasting “has great value,” as “it is a need of the spirit to relate better to God.”  Fasting reflects “a sincere desire for interior purification, willingness to obey the divine will, and thoughtful solidarity toward brothers, particularly the poorest,” he added. “There is, then, a close link between fasting and prayer. To pray is to listen to God and fasting favors this openness of heart,” John Paul II stressed. 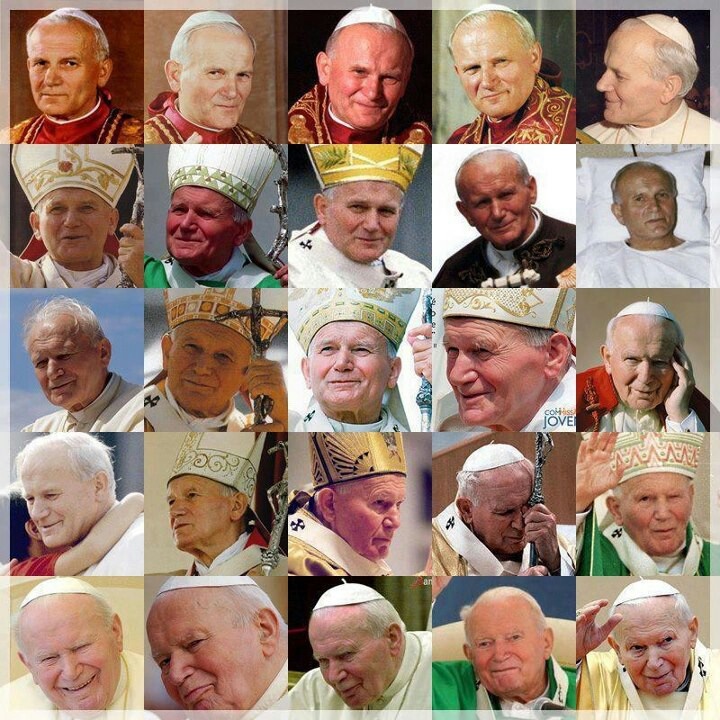 JPII: Through the years of his pontificate

Comments of the Day: I was very fortunate for having grown up and reverted to my faith during JPII’s pontificate.  It was almost as if I could feel him encouraging and praying for me to return.  He truly made a difference in my spiritual life and inspired me to be a better Catholic.  His funeral was one of the most amazing things I’ll ever see in my lifetime and was one of those moments that just made me stand still in my soul in awe.

Pope John Paul’s funeral brought together what was, at the time, the single largest gathering in history of heads of state outside the United Nations,[3] surpassing the funeral of Winston Churchill (1965). Four kings, five queens, at least 70 presidents and prime ministers, and more than 14 leaders of other religions attended, alongside the faithful.[4] It is likely to have been one of the largest single gathering of Christianity in history, with numbers estimated in excess of four million mourners gathering in Rome alone.[5][6][7]

Not only was he an inspiration and so likeable, but he also committed himself and others to practice mortifications to move forward in the spiritual life.  Fasting was high on that list.  If he was Pope again today, I am confident he would especially encourage this practice, given the increasing level of pleasure, comfort and consumerism experienced in advanced, Western democracies (e.g. Amazon Prime 1-hour delivery service, anyone?).  As he said, eat only what you need during this time; it is interesting to find that “need” diminishes as a function of a deepening prayer life.

Let us celebrate our catholicity today as we fast in honor of JPII! May he continue to guide and pray for us in Heaven!